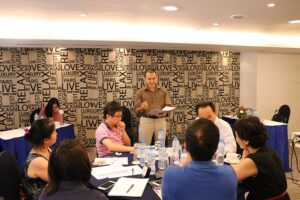 WIAL’s Action Learning approach has elevated the performance of hundreds of organizations worldwide including Microsoft, Hong Kong Transit and IBM. For an extended list, check out our Clients. Many universities around the world have also incorporated the WIAL model into their curricula and learning methodology. WIAL members have written numerous books and articles on the subject of Action Learning, including three that are predicted to be classics in the field:

Search our Directory of Certified Action Learning Coaches to find the perfect fit!

Want to stay up to-date on all things Action Learning?

Professor Reginald Revans is the originator of Action Learning. He invented and developed this method in the United Kingdom in the 1940s, working in the Coal Board. He encouraged managers to meet together in small groups, to share their experiences and ask each other questions about what they saw and heard. The approach increased productivity by over 30%.

In 1995, WIAL co-founder Michael Marquardt met Reg Revans, widely recognized as the father of Action Learning. The two men began a dialogue that led to the development of the WIAL model of Action Learning, which focuses on continual learning. After years of testing, research and refinement, the model took final form in the renowned six components and two ground rules of Action Learning.